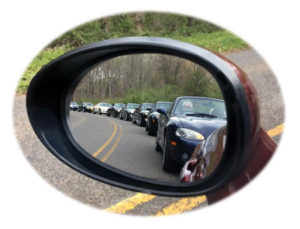 Saturday morning April 28th may have felt more like the beginning of March than the end of April but the club got a respite from our soggy Spring and our first run of the year was a great success.   Partly sunny sunny skies, blustery winds and cool temps didn’t keep a significant proportion of the over 25 cars from running with the top down. (Photo Credit: Tim Collins)

This year’s inaugural run took place in Middlesex and New London counties, an area that was new to many of the participants.  The route that Dave and Cindy planned though the small Colonial era towns of the central Connecticut river valley and shoreline featured lots of super twisty roads and uncrowded byways.

Because of the large number of participants we formed two groups.  Both groups kept up a good pace despite being slowed by a few instances where the previous day’s deluge had washed gravel across the road.  We lucked out with our timing as we approached the East Haddam Swing Bridge heading east over the Connecticut River.  Moments before it had been closed to traffic due to a lightening strike from the previous night’s storm. ( Unfortunately  one club member was unable to participate in the run because the bridge was closed as he headed west to the Chester CT starting point.)

About half way though the run we took a break at Gillette Castle State Park.  Although the Castle wasn’t yet open for the season, the visitors center was open and several members also took in the excellent views of the Connecticut River Valley from in front of the Castle.

The run ended with a lunch at the Lenny and Joe’s Fish Tale restaurant on rt 1 in Clinton.  Afterwards some of our members took the short drive over to Hammonasset Beach State Park.

Those club members that missed the event or those who enjoyed it and want to run it again in the future can download a PDF of the turn by  turn directions:  Select  CLUB RESOURCES from your dashboard menu.  Then select the CLUB DRIVE ROUTES link  on the left hand side of the page.